There’s more to Bass Lake than bass. The lake boasts a surprising variety of species, as well as a unique mix of terrain and tradition.

Located just west of the village of Sheguiandah, Bass Lake indeed has bass, both large mouth and small mouth. But it also has pike, pickerel, perch, blue gill, and most remarkably: muskellunge. It is, in fact, Manitoulin’s only inland lake to support the coveted game fish, famous for its feistiness and size.

The north shore of the lake is checkered with farms, some still operated by the same families who settled here well over a century ago. Broad green fields roll lazily back from the shoreline towards a limestone bluff, and tractors, in the summer months, chug slowly across them, cutting the first hay of the summer.

The south shore, by contrast, is densely wooded, mostly uninhabited, and punctuated, in two places, by striking outcroppings of white quartzite. These peaks, along with a similar outcropping in the village of Sheguiandah, where an ancient quarry was discovered in the 1950s, represent the only examples of this stark granitic landscape to be found on Manitoulin.

Most of the south shore is owned by Sheguiandah First Nation, members of whom continue to utilize the land in the same manner as their ancestors. “There is still some medicine that we get from there,” notes Noman Aguonie, “and we have a sugar bush that has been used for generations.” In the spring, First Nation families boil sap in a cast iron pot suspended over a fire.

The sugar bush is also noteworthy for harbouring a monster maple that was deemed the largest on Manitoulin in the early 1990s when the late Grant Garrett and the Manitoulin Nature Club held a biggest tree contest.

If there was a biggest fish contest, Bass Lake would probably figure as well: Mike Sprack of Manitowaning once caught a 36-pound muskie here, and about 25 years ago, Kirby Burnett reeled in a 28-pounder while fishing with his cousin Amy Burnett.

Mr. Burnett’s behemoth stretched four feet in length, a third the length of the 12-foot rowboat he was fishing from. To land it, Mr. Burnett says he “hit it over the head with the paddle.”

The Burnett family goes back five generations on Bass Lake. Kirby’s uncle Blake Burnett still farms the property that was settled by his great-grandparents in 1875.

The farmer doesn’t fish much himself, being generally busy with his beef cattle operation.

Yes, Bass Lake itself might look tame and peaceful, but the surrounding hills remain fairly wild. Mr. Burnett has seen many bears and once, several years ago now, a pair of moose.

For anyone who travels Northern Ontario, a moose is not an unusual sight, of course, but it’s highly unusual for Manitoulin. “Those were the first ones I ever saw anywhere on the Island,” Mr. Burnett notes.

Muskie are unusual for the Island too, but they thrive here in Bass Lake. Mr. Sprack has spent many pleasurable evenings on Bass Lake. Many, many evenings.

“Through the latter part of the ‘70s and all of the ‘80s, I would spend four to five nights a week at Bass Lake,” he says. “It’s a beautiful little lake and puts out a lot of muskie for its size. It’s deceptive, looking at it.”

Just a mile and a quarter long, Bass Lake doesn’t look like it would support many muskie, but it reaches depths of 40-feet-plus, according to Mr. Sprack, and “it’s a basin lake, with no shoals. Basically, you can run around it all day and not hit any rocks.

Muskie have frequented the lake for decades. Cliff Lewis, an old-timer with whom Mr. Sprack spoke at one time, “told me that they’d been here in this lake for as long as he could remember, and he fished in the 1930s.

Mr. Sprack concedes that fingerlings were stocked in the 1970s, but he describes it as a “reintroduction, a way to strengthen the gene pool. I find it hard to believe that they would have stocked muskie prior to the 1930s.”

His assumption is that the muskie “migrated up the creek (Bass Lake Creek, which runs from the lake to Sheguiandah Bay) before it was damned.”

Now, in summer months anyway, the creek is not much more than a trickle, but conveying muskie up from the big water wasn’t its only function in the old days. It once powered three mills, a grist mill, a sawmill and a woolen mill.

“The grist mill was at the headwaters of the creek, where it leaves Bass Lake,” a local historian says, “It was torn down (in 1958) when they were working on Highway 6.

The late Alec Murray, who lived just west of the creek outlet on Bass Lake, and whose family operated Manitoulin Gardens, a fresh produce and flower business, for many years, said it’s a real shame that the mill was torn down. “It was three storeys, with a log frame. It could’ve been a real tourist attraction.

Tourists should still be attracted to Bass Lake, though, Anglers, especially, will enjoy testing its waters, for muskie, of course, but also for bass or perch or pickerel, or for pike, the muskie’s cousin.

Just make sure you know the difference. Mr. Sprack notes that muskie and pike are often confused, and since there is a minimum size requirement for muskie, 32 inches, this can be a problem because a person might land a smaller fish they believe is a pike, when it’s really a muskie.

The Sudbury chapter of Muskie Canada has recently posted an identification sign at the Bass Lake public boat launch, located at the end of Russell Street, near the intersection of Highway 6 and the Townline Road.

It gets a bit complicated, since pike and muskellunge can cross-breed, but Mr. Sprack stresses that the “hybrid is still considered a muskie, and it’s pretty easy to tell the difference: pike have white spots, but neither muskie nor hybrid muskie do.

If fishing isn’t your scene, there are other ways to experience Bass Lake, notably an excellent hiking trails: the “Lewis Twin Peaks Trail”, leaves from a pullover spot on the west side of Highway 6, just south of the bridge over Bass Lake Creek.

Named for the access it provides to the two quartzite peaks that loom above the lake’s southeast shore (as opposed to the creepy, short-lived David Lynch TV series of the same name) this two-kilometre trail is well worth experiencing.

Another, admittedly lazier, option is to simply drive along the Townline Road. Doing so, you’ll see the lake spreading out to the south, its surface shimmering in the sun, a fishing boat or two (or, more rarely, 10) relieved against the rippled water. 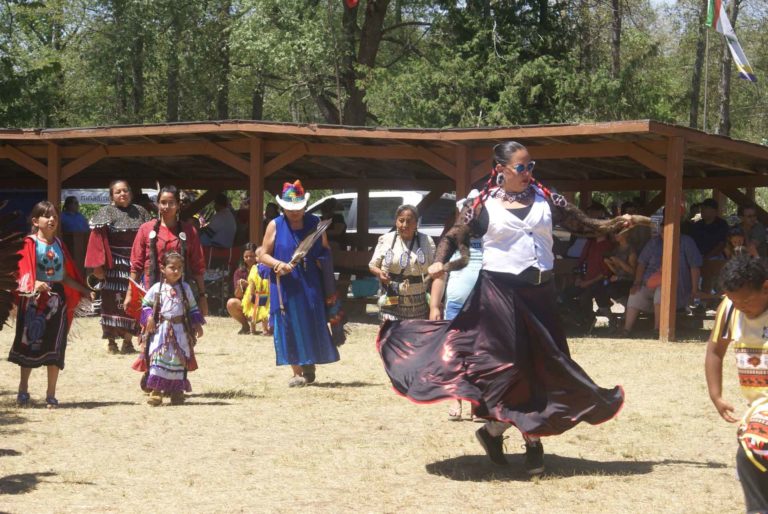 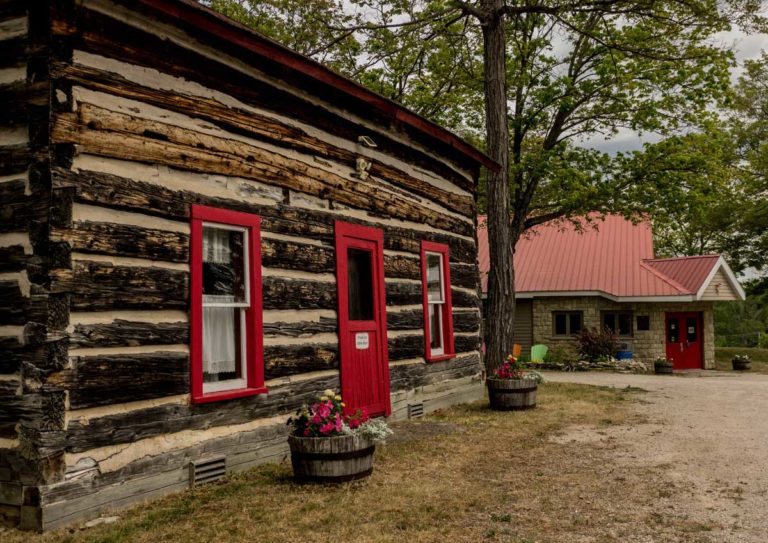 Centennial Museum Sheguiandah Two museums within easy access to each other, in Little Current and Sheguiandah, each distinctive, tell of
Learn More 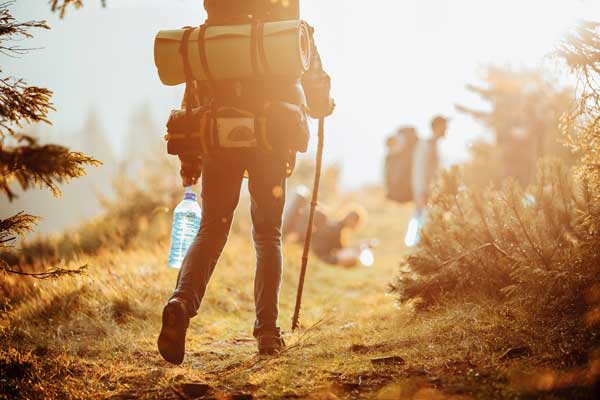 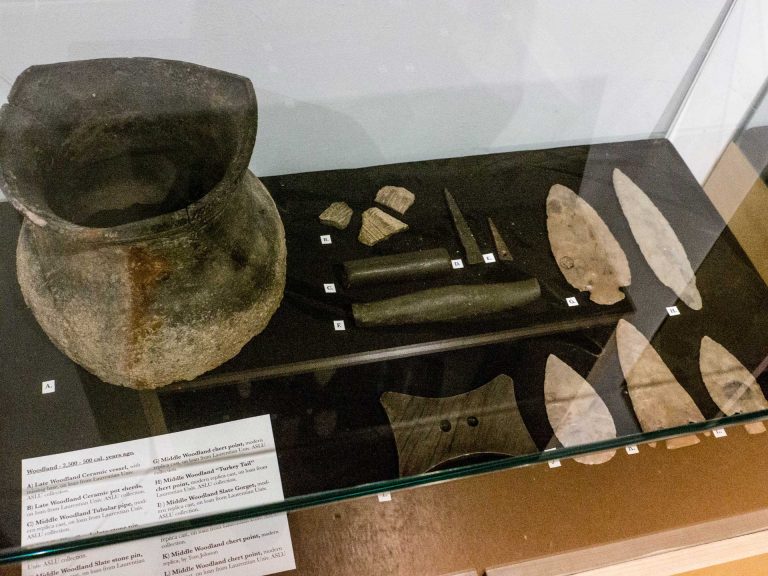 Sheguiandah National Historic Site: Twice the Age of the Pyramids of Egypt

Sheguiandah National Historic Site: Twice the Age of the Pyramids of Egypt When Thomas E. Lee, an archaeologist with the
Learn More 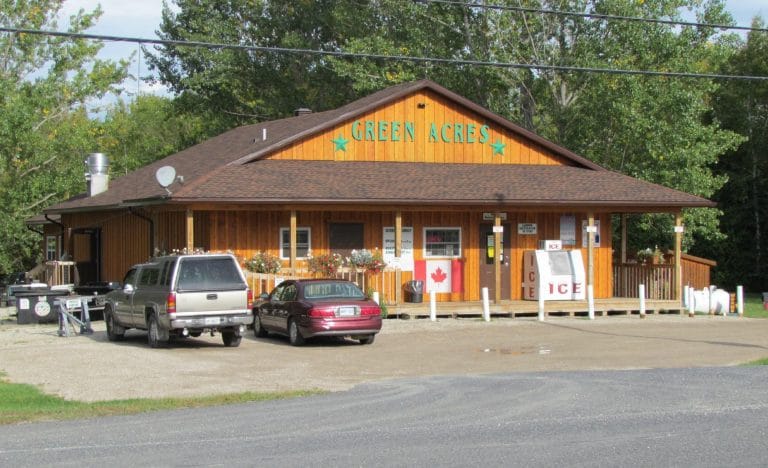 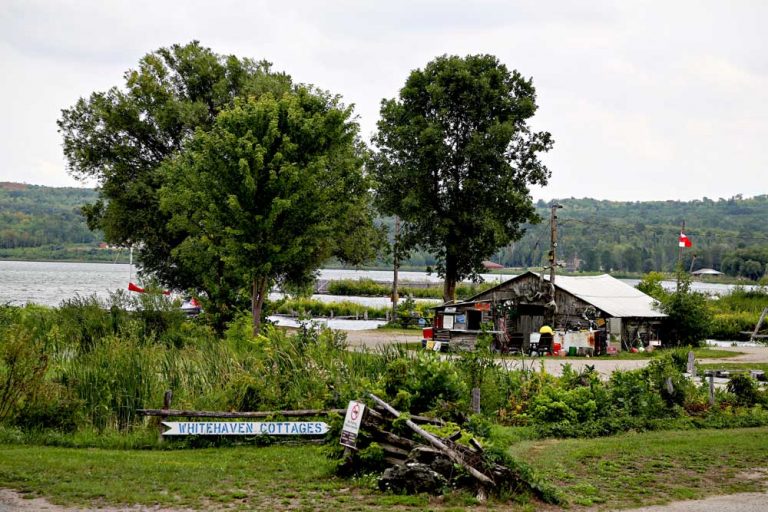 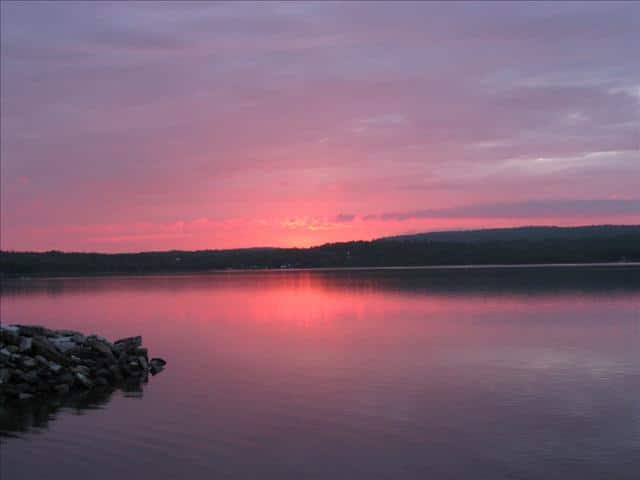 Batman’s Cottages & Campground Sheguiandah Bay Just south of the historic village of Sheguiandah, we are a place families can
Learn More

There are interesting buildings to see too, such as the Quonset hut (now a residence) that used to be Sheguiandah hockey arena (and home of the Sheg Bears, a team that apparently won a few trophies in its day), and the old Howland municipal building, which used to be a schoolhouse.

The late John Dunlop, who lived on the south side of nearby Pike Lake, used to drive a horse and cutter across the lake in winter to reach the school, and members of the Atkinson clan were known to skate across on occasion.

While driving, or hiking, or fishing around Bass Lake, expect more than the obvious.

Bass Creek, where it runs out of the lake that gives it its name and down to Sheguiandah Bay, was completely rehabilitated as a walleye/ pickerel spawning ground a few years ago by the Little Current Fish and Game Club and the Island wide environment organization, Manitoulin Streams.

Rocks were placed “just so” in the water to slow down the current and to make the way easier for spawning fish to fight their way up stream. The creek was designed for pickerel but other spawning fishy species find the improvements useful too in their reproductive lives.

Significant tourist attractions just downstream are the reproduction Batman’s Mill (on historic grist mill recreated and a real photo-op for visitors) and nearby Bass Creek is a raised viewing platform that provides a fisheye view up and down the stream with all of its underwater improvements within view. In the spring, you can also watch the spawning pickerel/ walleye making use of these man-made improvements as they rush to reproduce.