About five kilometres shy of Meldrum Bay, Manitoulin’s westernmost community, a sign appears on the south side of Highway 540 saying “Lily Lake.”

About five kilometres shy of Meldrum Bay, Manitoulin’s westernmost community, a sign appears on the south side of Highway 540 saying “Lily Lake.” Few people venture down this unprepossessing byway, and the ones who do might be somewhat reasonably expect to find a pond choked with lily pads, or alternatively, a lake chock-a-block with cottages.

Neither is the case. The water lilies, for which this idyllic lake was presumably named, are few and far between, and cottages are practically nonexistent.

It boggles the mind, really, how such a scenic, inviting spot could remain so pristine and unpopulated. There is just one camp on the entire lake, and you won’t even see it unless you know where to begin looking; it’s hidden behind a thick screen of trees.

This camp, used primarily for hunting, was established by the late Pauline Smith of Gore Bay, and her late husband Fred in the 1940s. “My husband and his brother learned about the land from Slim Golden (a lawyer on Manitoulin, now deceased), and we had the camp built out of material that came from the old skating rink in Gore Bay,” Mrs. Smith recalled several years ago. The late Alf Turner of Gore Bay “built it in his yard,” she remembered, and then they trucked the structure over to Lily Lake.

Prior to the death of Mr. Smith, the Smiths passed on the property to their niece and husband, Lynn and Len Doucette.

The rest of the shoreline of Lily Lake is essentially undisturbed, except for the “quad road” that comes down to the water’s edge, and could be mistaken, from a distance, for a deer trail. Kingfishers swoop along the thickly wooded banks, and terns’ wheel above the open water.

Larger critters have also been known to frequent Lily Lake according to the late John McRae whose family owned two islands on the lake since the early 1930s (daughter Shelagh McRae is a physician in Gore Bay.)

At one time, Mr. McRaes father, W.F. McRae a crown attorney in Gore Bay, owned most of the property surrounding Lily Lake which he used for timbering. When he sold the property to the Ontario Paper Company “he kept the islands” said his son, “because he enjoyed them so much.”

As a boy, Mr. McRae cherished the time he spent at Lily Lake with his father fishing for bass and exploring the shorelines. The family never built a cottage on the islands, or on the mainland, but would stay in an old farmhouse near its shores. “We used to call it the old it the Armstrong house.”

There were several Armstrongs who inhabited the Lily Lake area. Ivan Trick, formerly a harbourmaster in Meldrum Bay and now deceased, said that Joe Armstrong, a bachelor, used to farm at the corner where Lily Lake Road begins, and his brother Jackson, whom everyone called “Manny” also lived nearby.

There was yet another Armstrong, named Lawrence, “who lived back in the bush and was something of a hermit,” according to the late Mrs. Smith. “My husband Fred taught him to drive.”

The Armstrong clan inhabited a settlement that was referred to as “the Burnt Land,” a string of about 10 farms situated on land near Lilly Lake that had been burnt over. Mrs. Smith said that “years ago, you could still see the burnt stumps.”

Dale Van Every of Meldrum Bay points out that “there was a school there at the Burnt Land, S.S. #2 Dawson. The building is still there on the north side of the highway.” He recalls when the first children from the Burnt Land community were bussed into Meldrum Bay to go to school, in the mid 1940s, because their school had been closed.

Mr. Van Every also remembers some of those children walking into Meldrum Bay, about a 5-kilometre walk, and assumes children from Meldrum Bay would have “walked out to Lily Lake as well.”

Going out to Lilly Lake as a boy was for Mr. Van Every, “the highlight of the summer.” His family would visit the lake at least once each summer and “have a picnic at the landing,” he recalls.

The landing is still there, and a fine place to picnic. A volunteer cuts the grass and empties the trash can, and shade can be found beneath a tree near the shoreline.

Lily Lake is warm, particularly near the landing, where the water remains quite shallow. It’s pretty shallow over all, maybe 10 to 12 feet average, and 25 feet at its deepest, according to long time Lily Lake visitor and fisherman.

The lake, said Mr. VanEvery, boasts a good number of bass, as well as pike and pickerel, the occasional rock bass and sunfish and also suckers.

Mr. McRae said the fishing was “fantastic” when he was a boy. At that time, in the 1930s, “the bass were so hungry they’d go straight for a feathered hook, and you didn’t even have to be trolling, you’d just drop a line.” The bass might not be as hungry as they were then, but Lily Lake remains “a great lake,” recalled the late Mr. McRae, “and it’s still got some good fishing spots.”

It also has a great beach, located on the south shore. Which means you have to have a boat, or be a particularly powerful swimmer, to get there.

But it might be worth the trip, not only for the beach, but for an additional reason. According to Mr. McRae and Mrs. Smith, you can hike overland from the south end of the lake to Greene Harbour, a bay on the south shore of the Island that used to feature a quarry.

This quarry (long defunct now and partially grown over) predates the massive Lafarge quarry on the extreme west end of the Island. Mrs. Smith believed that it supplied the stone used to build the locks at Sault Ste. Marie. 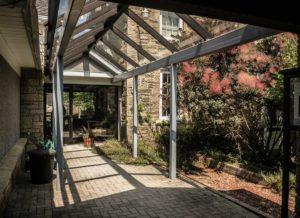 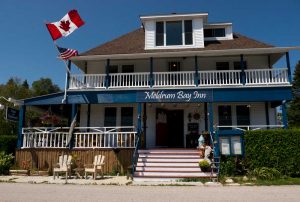 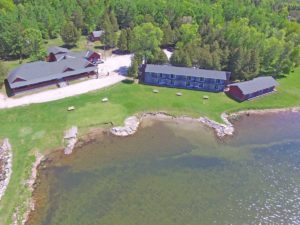 The hike from Lily Lake to Greene Harbour doesn’t take long, according to the late Mrs. Smith’s memory, or it didn’t used to, at any rate, when there was a discernible trail. It might be tougher going now, she admitted.

There is, on the other hand, a road that leads most of the way there, located just west of Lily Lake, Mrs. Smith pointed out.

But before you go looking for the “quarry road,” why not try truing off at Lily Lake Road. It’s a short trip to the water, and you won’t be disappointed. 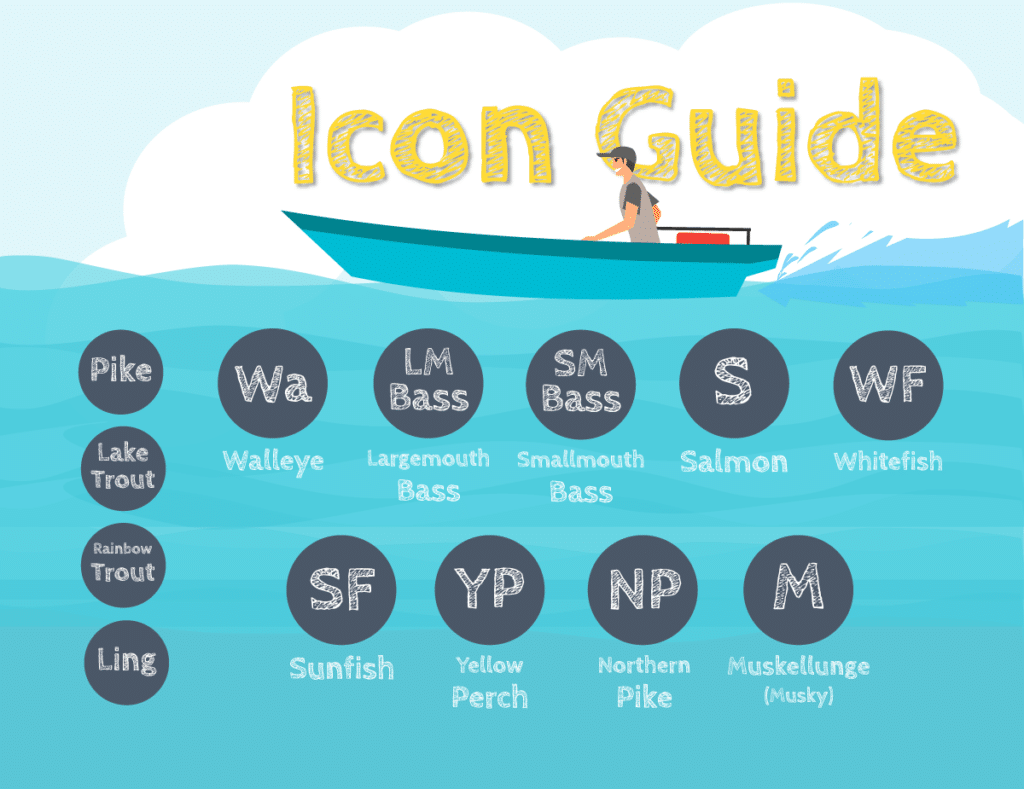