Kagawong is a sprawling, unusually shaped lake. I’ve seen it described as an “upside down trident,” but to me it looks most like a Danforth anchor, the long thin bay to the north being the shank, and the two deep bays to the south the flukes.

The lake is 100 feet above Lake Huron, according a long-time cottager on the lake, and unlike the Island’s other large lakes, this one drains into the North Channel. The outlet is the Kagawong River, which plummets over a cliff at famed Bridal Veil Falls, then winds and tumbles past the village into Mudge Bay.

Like Lake Mindemoya, Kagawong has the distinction of having a large island. Kakawaie Island, as it’s called, is a long, thin island in the lake’s large southeast bay. A geologist who cottages on Kagawong believes this island is an esker. It’s privately owned, but uninhabited. It spans 90 acres and boasts a sand beach that people sometimes use for picnics, according to a member of the Dawson family, whose grandparents established Dawson Resort on East Perivale Road, in 1934, to augment their farming business. Deer are often seen swimming from Kakawaie Island to the mainland, the operator of Dawson resort adds.

In 1867, the year of Canada’s formation, the lake was considerably less populated. In Exploring Manitoulin, author Shelley Pearen writes that when the township was surveyed in that confederation year, just three native families lived in the village of Kagawong, one of which had “gardens of potatoes and corn…on the east shore of Lake Kagawong.”

The first European settlers in the area, according to Ms. Pearen, was a French-Canadian named Luke Chatreau, who built a cabin on Lake Kagawong around 1872.

Things have certainly changed in the intervening 150 plus years, but there are still long stretches of Lake Kagawong’s shorelines that remain undeveloped. One area I’d heard about that was particularly interested in seeing is a steep rockface known as Redrock, so named because the sunset occasionally paints its white limestone surface crimson.

Asking when I contacted a friendly cottager and mentioned that I was keen to see these rocks turn red. Would he take me out in the evening, so I could experience this phenomenon? No problem, he said.

I arrived at his place around 8 pm.

We walked down the steep, switch-backing stairs, to the water. This, in itself, surprised me. I hadn’t realized that Kagawong had such precipitous shores. But the shoreline at the camp was nothing compared to the topography on the other; eastern side of the bay.

Redrock. It wasn’t red yet, it was too early, and anyway the sun had dropped behind a cloud but it was steep, I could see that even from a distance.

Enroute, in my friend’s fishing boat, he filled me in on the fauna and aquatic life on the lake. Mink regularly runs along the shore, for instance. A wide variety of fish flourish in its depths, pike, walleye, perch, smallmouth bass (enough of the latter that a popular bass derby is held each August.) Pickerel (Walleye) are now a game species in the lake thanks to the efforts of the Gore Bay Fish and Game Club. A golden eagle is presently nesting on a tree on the “flats” along northeast shore of the lake. He pointed out several mergansers, and at one point a pair of loons flew overhead.

Then we were cruising along below the cliff known as Redrock. From a distance it had looked sheer and smooth, but up close it was full of caves, crags, crumbling ledges, cedars clinging stubbornly to its slopes. “What I tell people is that you’re looking at thousands of years of history here,” my friend says. “And it’s always changing. Mother Nature keeps carving away at it.” 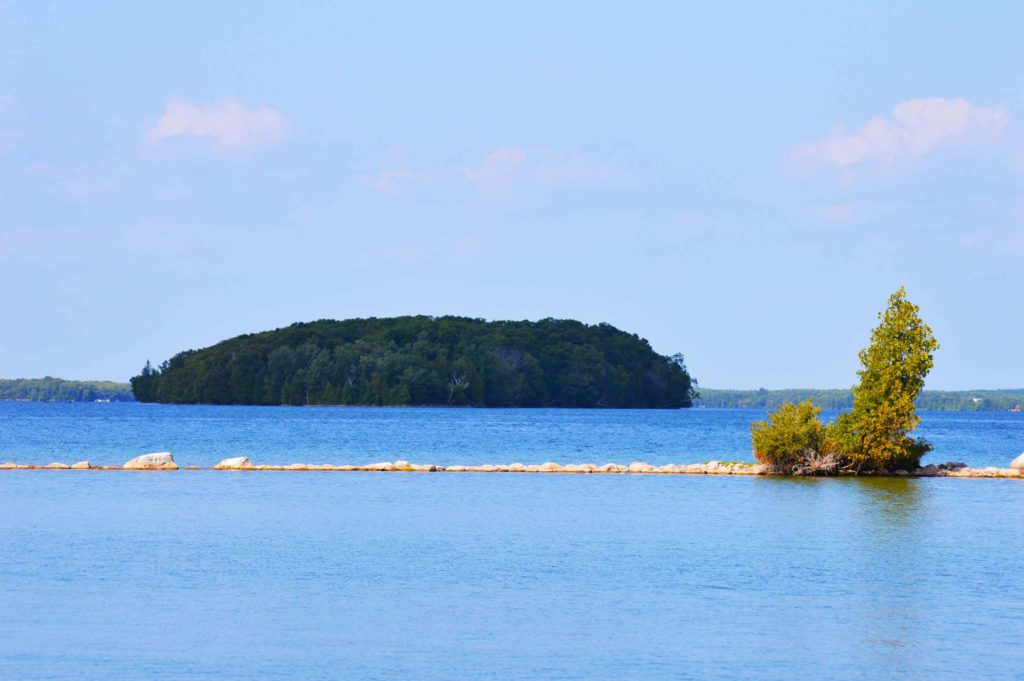 He gazed at the steep, crenellated cliff, and grinned.

“The strangest thing I ever saw here was a baby raccoon, hanging off the cliff with one arm, it must have fallen or something.”

A more unsettling image is that of the deer which, according to Mrs. Dawson, are occasionally seen plummeting off the cliff.

“So, I guess they are bucks fighting for territory,” she mused.

I didn’t see any acrobatic raccoons or falling bucks. Nor any red hue. But it was still beautiful. Farther down there were cottages, holes blasted from the rock to allow water access for boats. (Blasting is not allowed now.)

Then we were heading back across the bay, Redrock behind us, and I’d pretty much given up on the idea of seeing that rockface turn red, when suddenly the sun slipped out from below some clouds, and I turned my head, and there, just as promised, was a brief ruddy glow. The rocks were turning red! I tried to take a picture, but we were too far away. I didn’t have a zoom, it wasn’t going to work.

But I saw it. The rocks turned red.

We chugged back across the bay of Lake Kagawong, just me and my pal, the sun now sunk behind the western shoreline, the clouds above looking bruised and luminous.

And when we glanced back to the east, we suddenly saw a full moon rising over that shore, a huge, pregnant orb, glowing an unearthly orange. 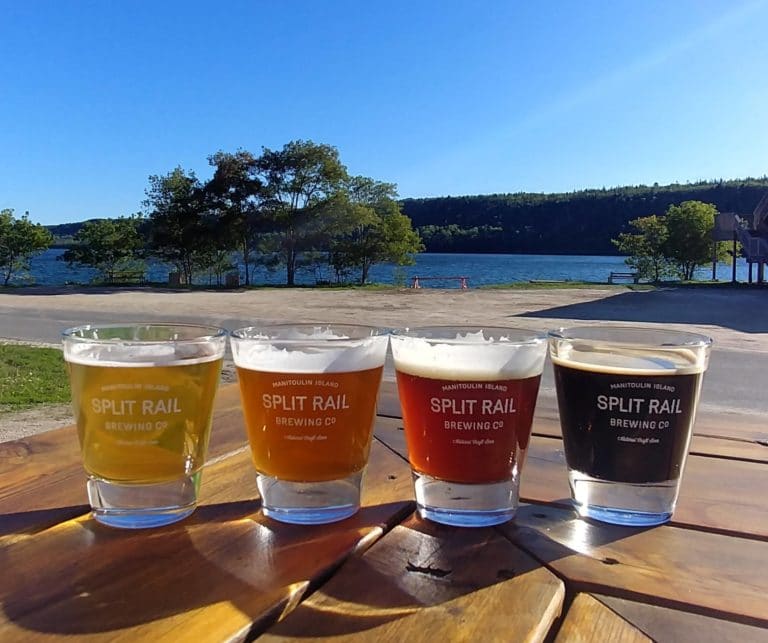 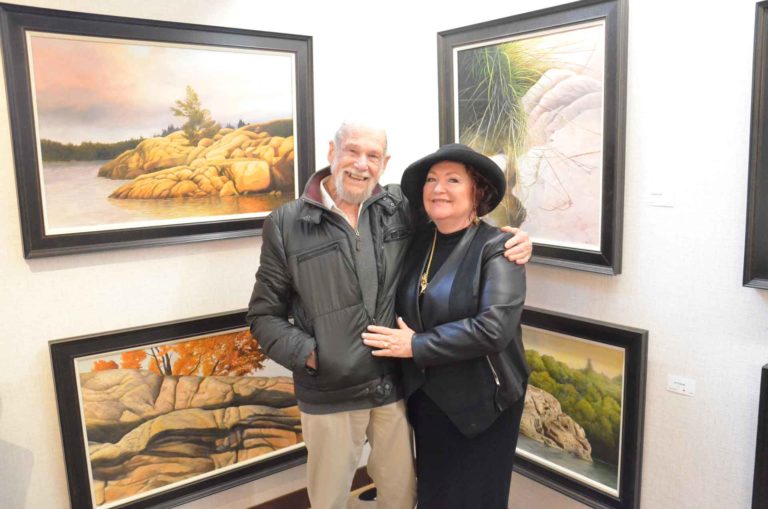 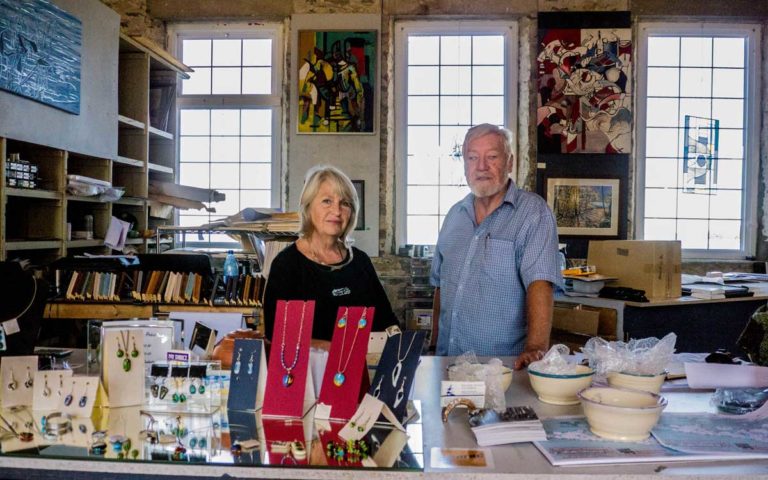 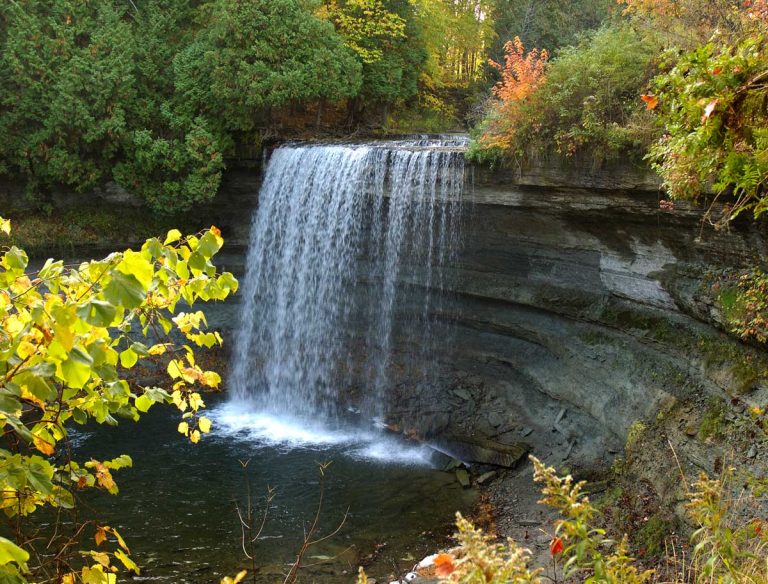 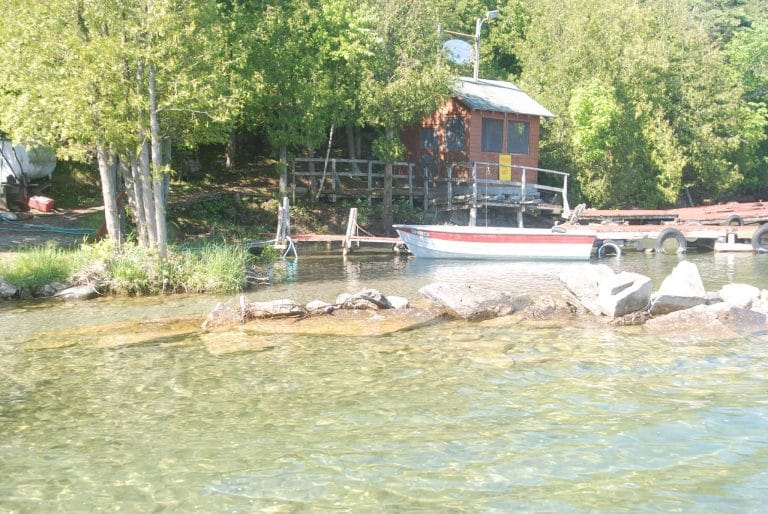 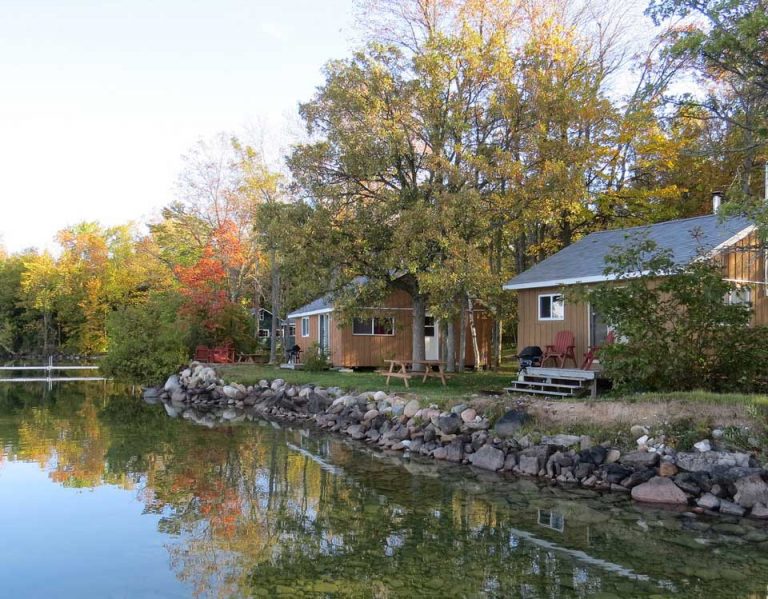 Lake Kagawong Family Cabins Lake Kagawong For a special family vacation and a back to nature feeling, please stay with
Learn More 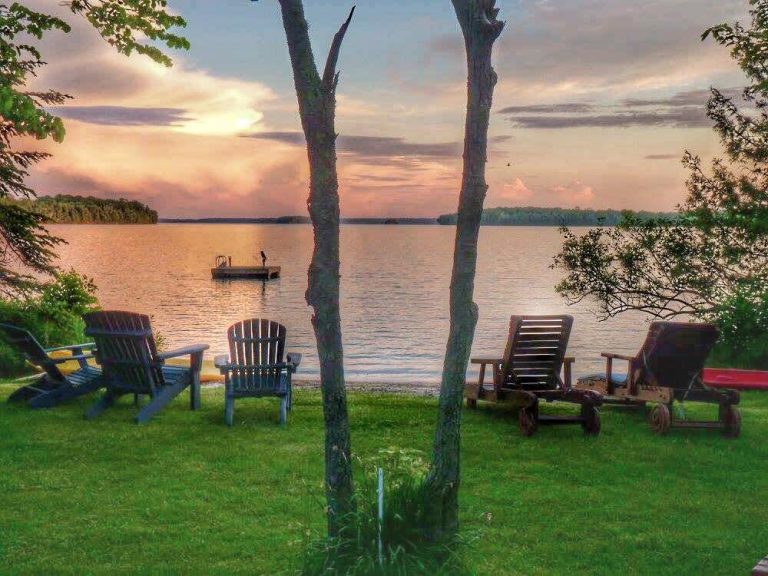 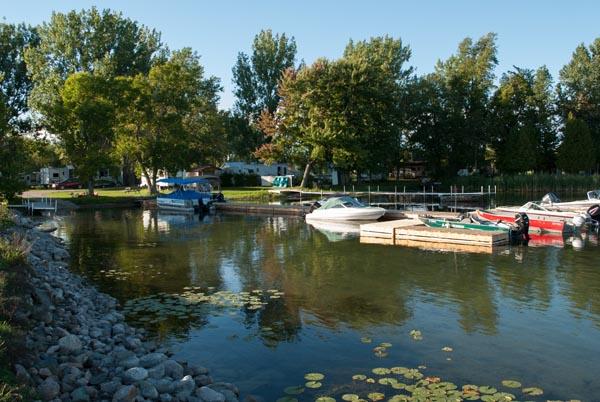 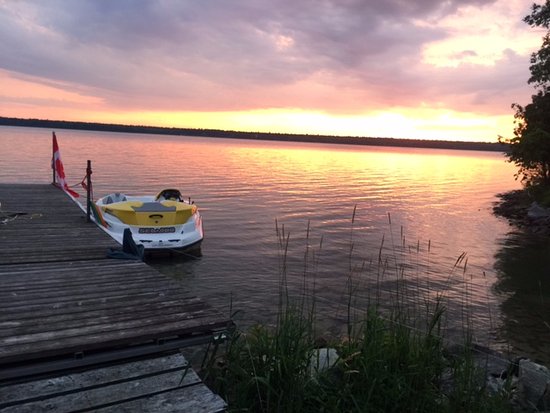 Lakeview Resort Lake Kagawong Your retreat on our Island of fresh air and sparkling waters, centrally located on the eastern
Learn More 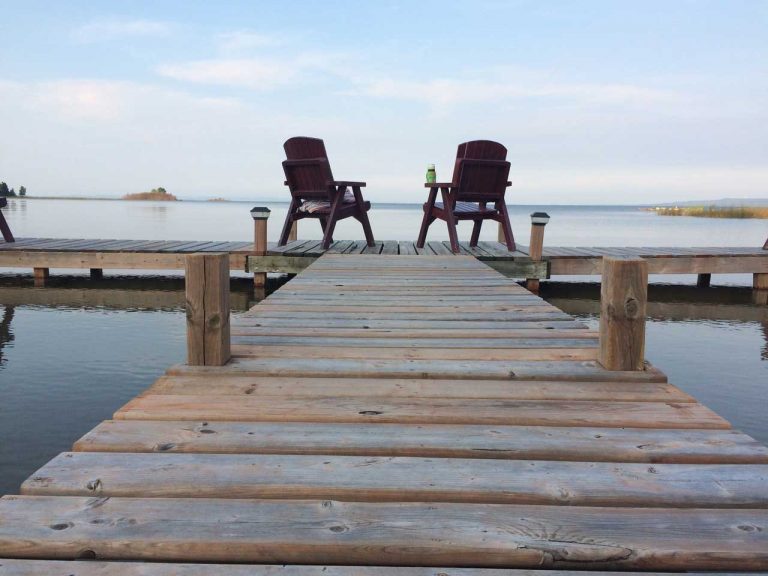 Another Lake Kagawong attraction, also on Perivale Road East, is the Perivale Gallery which has become a destination on its own for art lovers. Proprietor Shannon McMullen features primarily Northern Ontario artists (although not exclusively) and her busy gallery is the sole venue to sell the landscape painting of famed Manitoulin artist Ivan Wheale.

Ms. McMullan is pleased that, even though her gallery closes around Thanksgiving each year, it typically remains at or very close to the top of Trip Advisor’s most popular attractions through the cold months.

The Perivale Gallery also offers a series of weekend art classes through the summer, most of them at the nearby Spring Bay Community Hall on Highway 542 in that village. The gallery also has a special two week mid-summer show, ‘In the Spirit of Tom Thomson and the Group of Seven’ that is special and unique in Northern Ontario.