Held the Civic Holiday Weekend each August is part of a North American powwow circuit that brings competitive dancers from all parts of Canada and the United States where they compete, within their chosen categories, for prizes and cash. It is a very large cultural spectacle with crafts vendors from all over North America on hand. Learn More!

Manitoulin’s newest trail and outdoor fitness park is located at Wikwemikong. Trailhead is at the end of Beach Road in Wikwemikong. The trail is 14 km of easy to intermediate trails, spectacular lookouts and educational signage. The Outdoor Fitness Park section of the trail is a double track, granular surfaced trail with five fitness stations equipped with outdoor fitness equipment so that trail users can take advantage of resistance training in a scenic natural environment. For information about the trail, contact (705) 859-3477.

Large dormitory for Jesuit clergy that burned in the early 1950s located beside Holy Cross Mission Church. A perimeter of solid stone walls, two feet thick and three stories high (minus the roof), are all that remain of the building. Often a venue for Debajemjig storytellers summer offerings.

When you gaze at a map of Manitoulin Island, one of its most distinctive features is the giant double peninsula that constitutes nearly the entire east side of the Island.

This is Wiikwemkoong Unceded Territory and it most decidedly is part of Manitoulin Island for it is connected to the nearest community, Manitowaning, by a wide isthmus that separates Manitowaning Bay on the north side and South Bay to the south.

When you travel to Wiikwemkoong, where the territory begins, the name of the road that changes to Wikwemikong Way and this is the communities defining street.

There are historic sites throughout this large community and one of them is on Wikwemikong Way, not too far along and on the left. There is a viewing platform there from where you can look out over Manitowaning Bay.

The other historical markers are located at or near Holy Cross Mission Church (also on Wikwemikong Way but several miles on at the top of the hill above the town of Wikwemikong). Another is located at the waterfront marina and explains the significance of the whitewashed log homes that are still in evidence.

The launching of the first modern era powwow in 1960 by committed community members is also noted, significant because this tradition had been banned and the know-how had to be found in Saskatchewon where the tradition has continued. That was the first pow wow in central Canada. Now, every First Nation community hosts its own cultural celebration in the spring and summer, but all have their roots in the determination of one woman, the late Rosemary Odjig Fisher, who re-established the tradition in her home community nearly six decades ago.

In the Wiikwemkoong area: 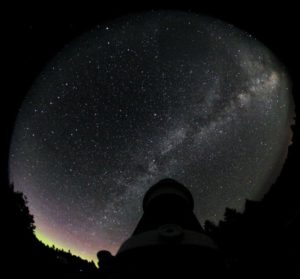 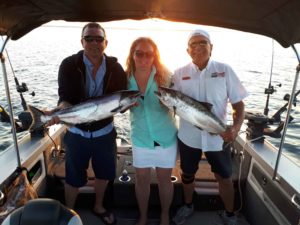 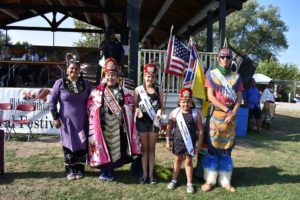 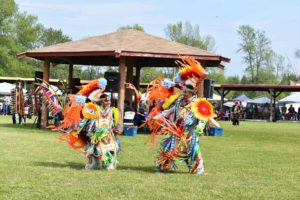 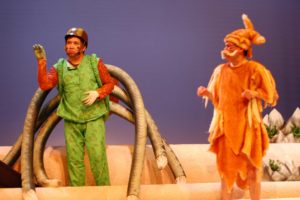 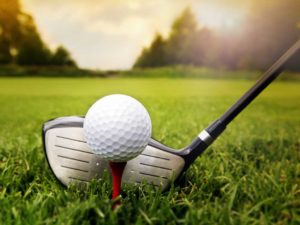 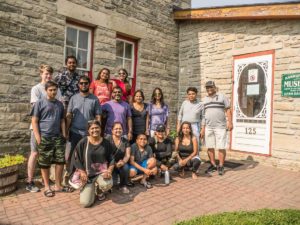 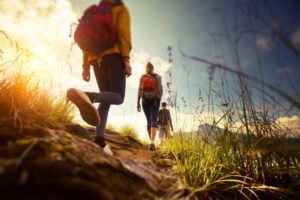 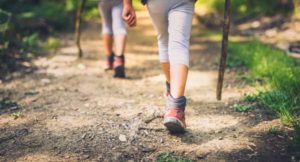 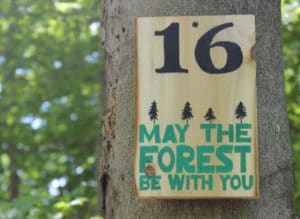 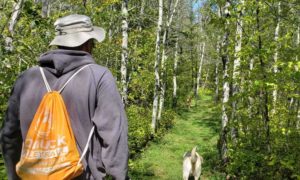 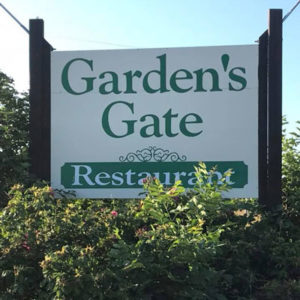 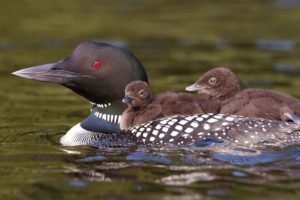 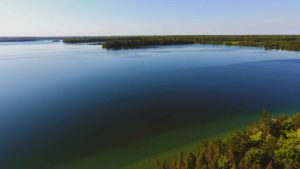 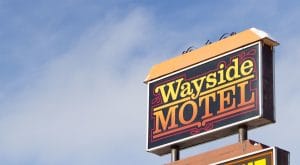 The community of Wikwemkoongsing is actually made up of a half dozen regions (Kaboni, Buzwah, Murray Hill, Wikwemikong, South Bay, Rabbit Island) as well as the primary village of Wiikkwemkoong which features shopping in the unique Andy’s, an indoor mall. Nearby, there are restaurants, a pharmacy, dollar store and all of the other trappings of a modern village.

The band council’s timber frame construction building is impressive as the community’s heath centre, nursing home, high school (plus two elementary schools) and the old stone-built Holy Cross Mission with the sturdy stone skeleton of a clergy residence that stands beside the church.

These “ruins” as they are locally known usually serve as the roofless but effective setting for one of the Debajemujig Theatre Company’s summer performances, usually around the same time as the major annual cultural festival ad powwow on Civic Holiday Weekend.

Traditional language and culture are important to this proud, independent community whose name says it all: Wiikwemkoong Unceded Territory: it’s ‘unceded’ because the community leaders in the nineteenth century vigorously resisted signing the 1862 treaty that would have effectively ceded authority to their lands to the federal government which would have given it back as an ‘Indian Reserve.” Uniquely in Ontario, Wiikwemkoong was never given away so that it could be given back, with strings attached.

There are descendants of three branches of the Anishinabek people represented at Wikwemkoong: the Odawa were the original inhabitants. The Pottawatomi came about 1836 and the Ojibway after 1862. Together, these groups represent the Three Fires Confederacy within the Anishinabek Nation.

Wikwemikong tourism has developed impressive hiking trails in the community: the Bebamake Trails.

The Territory also owns 14,000 hectores of land near Killarney and along the Georgian Bay shoreline in that area, Wikwemikong Tourism has developed more trails at Point Grondine Park www.grondinepark.ca.

On the cultural side, Wikwemikong Tourism offers its program ‘Authentic Indiginous Experiences’ and there are many local artists and crafts people in the community, some with their own galleries such as the famous artist James Simon Mishbinijima whose gallery is on Lakeshore Road.

The community also supports a public art gallery which is located in one of the plazas on the right as you approach the village of Wikwemkoong.