Overlooking the distinctive V-shaped bay bordered by the lushly-cedared heights of the East Bluff on one edge and the town and the gentler slopes of the West Bluff on the other, the Harbour Centre extends a commanding welcome to Gore Bay’s waterfront.

Within, on two floors, is a warren of light-filled, wood-lined artist studios, galleries and shops offering all manner of Manitoulin-made fine art, glass works, textiles, soaps, jewellery and much else to browse. On the third, topmost floor, up a broad staircase to a bright lobby, is the William Purvis Marine Centre, housing the Town of Gore Bay’s huge collection of nautical memorabilia gathered by historian G. I. ‘Buck’ Longhurst during his long career on the Great Lakes.

Visitors, researchers and boating enthusiasts are treated to a unique display that comprises an impressively thorough history of commercial shipping on the Great Lakes. In the temperature- and humidity-controlled loft space, the lives of the legendary fishing, freight and passenger boats are laid bare in original log books, ships’ wheels, lanyards, flags, photos, shipping company cap and jacket badges and even little plates and coffee mugs decorated with a ship’s name, from a long-ago ship’s dining room; intricate handcrafted model boats dot the room, re-creating all the details, in miniature, of the great commercial sailing vessels of the past.

Mr. Longhurst is the curator of the collection, including an archive room of “17,000 slides and 20,000 prints and the history of practically every company and vessel that sailed on the Great Lakes,” amassed over a lifetime of working on their waters and shores.

But his love of the ships started way before then. “As a kid, I was always at the dock watching the boats unload. I watched all day as the boats came through, the boats I’d read about.”

After high school Buck went into the navy until Canada’s defense forces were amalgamated in 1965, then became a letter carrier and supervisor until 1970 when his life changed on meeting Jack Purvis on the waterfront in Sault Ste. Marie. 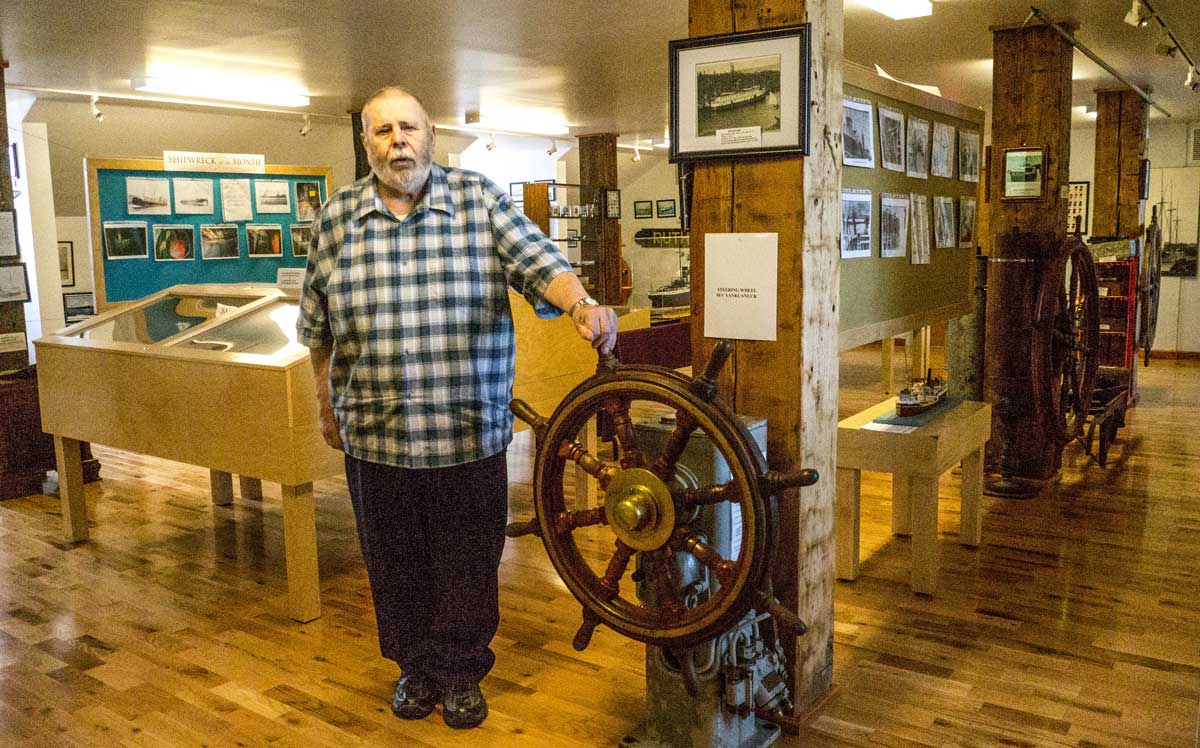 The marine museum is named in honour of William Purvis, explains Mr. Longhurst, the Scottish patriarch of the Purvis commercial fishing clan, who was appointed the first lighthouse keeper at Great Duck Island in 1872–13 miles from today’s Purvis Fisheries location at Burnt Island; by 1882, William had started to fish commercially with his five sons

“The Purvis family is one reason why Gore Bay grew to be a boomtown in the 1880s and 90s,” says the historian. “They built the town, many of their huge old houses still stand today. The boys all were commercial fishermen. William’s son James started Purvis Brothers Fisheries, and he also ran the mail, snowplow and motorcar services, a livery stable and a dairy. The Purvis’s were the prime movers behind Gore Bay’s becoming the judicial seat of the Island. By 1934, they owned the largest independent fishing fleet in the Great Lakes.”

Buck Longhurst started working for Jack Purvis soon after their meeting on the docks, spending years on Jack’s ‘YankCanuck’ as a deck hand, crane operator and second engineer, earning his tug master and marine and hoisting engineer credentials as he went. In the museum, he proudly shows off the ‘YankCanuck’s steering column, wheel and ship’s bell below a photo of the ship as he fondly remembers it.

“I used to see all these old boats out there. With the opening of the St. Lawrence Seaway, all the little canal boats, the small upper lakes boats, were disappearing. I started taking photos and whenever I got a vacation I’d be at Sarnia or the Welland Canal taking pictures or getting rides on boats and taking more pictures. My hobby turned into an obsession.” As he towed ships to their final resting places in the scrapyard, he’d salvage unwanted name plaques, keys, flags, log books and brass railings to add to his growing personal collection.

In the museum, there’s a model of the ‘Gore,’ the ship that got stuck in the ice of the bay until spring and gave Gore Bay its name, built by Buck Longhurst himself, along with his models of the SS ‘Manitou,’ the ‘Mindemoya’ and the ‘Langell Boys.’ The SS ‘Manzutti’ has a miniature crane on the deck, a replica of the very crane Mr. Longhurst operated for 20 years. “This model was built by a professional model builder,” he says, pointing to the fine detail work, “and cost eleven thousand dollars.” 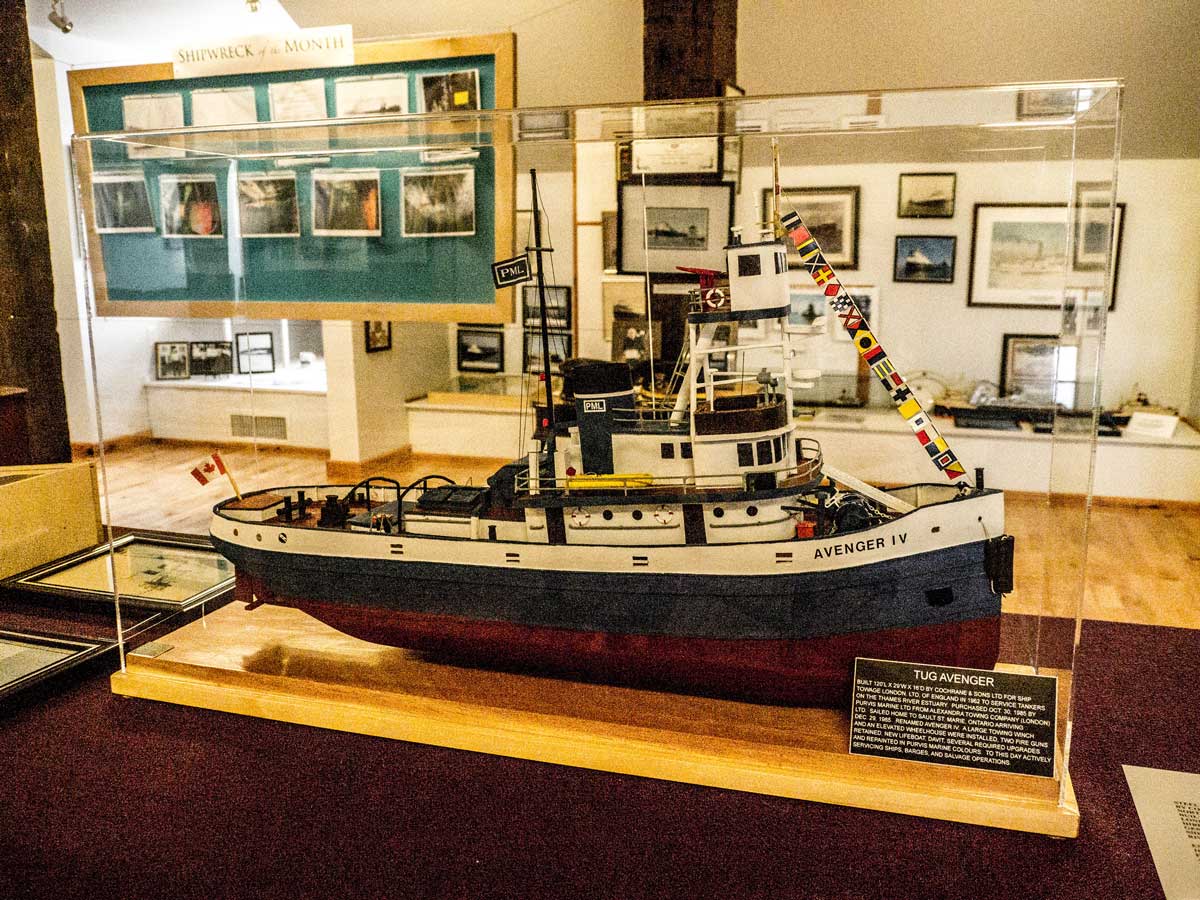 The ‘Avenger IV’ display features a beautiful large model of the tug and the log book of her decommissioning trip to Gravesend, England in 1985. Yes, Buck Longhurst was on that trip, “as a crew member for 59 days. There was no heat on those English tugs.”

Here’s a model of the ‘Edmund Fitzgerald,’ immortalized in song by Gordon Lightfoot, tragically sunk in hurricane-force winds on Lake Superior in 1975, drowning all 29 aboard. “It’s a great song,” says the marine history expert, “but Lightfoot got some details wrong. He says she was fully loaded – she wasn’t. And that she was bound for Cleveland – but she was going to Detroit.” There’s no reason to disbelieve this author of eighteen books and fervent devourer of maritime lore.

Buck Longhurst remembers the long-gone days when “you couldn’t get a semi-trailer truck onto the ferries until the 1960s, and they’d only get as far as Espanola on the north shore. The road from Espanola to Little Current “was impassable in all seasons” for trucks, and was nicknamed the Drunken Snake Trail. “Supplies were hard to come by and costly. Boats got through where cars and especially trucks could not.

“When I look around today I can say, ‘I dredged the marinas at Gore Bay, the Sault, at Spider Bay in Little Current. I put in the helipad at Gros Cap Lighthouse, built the Lafarge docks at Birch Island. In Gore Bay, all the boats in the marina are making use of the work I and others did; it makes the toil and hardship worthwhile. If you helped to shape the face of the area, it’s great to know your work means something.”