Island community museums are filled to bursting with mementos of collective histories, gathered by dedicated volunteers and local families keen to foster appreciation of their area’s past. Kagawong’s Old Mill Heritage Centre Museum collections are housed in the former pulp mill, built of stone in 1925 at the edge of Mudge Bay to process the products of the booming logging industry; the atmospheric limestone enclave with its soaring ceilings and tall windows is a perfect showcase for the Billings Township memorabilia contained within.

Curators, by and large, are an enthusiastic lot and Rick Nelson, the Kagawong Museum’s curator, is a prime example of the kind of fervor that marks a successful collection. Quick to praise Billings council’s museum board volunteers’ initiatives and hard work, Mr. Nelson has been the face of the museum for the last 10 years, greeting visitors and orienting them to the treasures awaiting.

Immediately upon entering, the sound and images emanating from a film on the Indigenous origins of Manitoulin Island grounds the museum experience in earliest inhabitation. Further on, a little room holds the delicate line drawings of talented local artist Jenna Carter, each featuring one of the many intact historical structures within the village of Kagawong, with an accompanying map that describes the genesis of all the buildings–for a walkabout later. In the corner, a 1930s wooden radio cabinet plays WWII broadcasts, surrounded by sepia toned photos of local men and women who contributed to the efforts of both World Wars, their uniforms, medals and stories now behind glass. 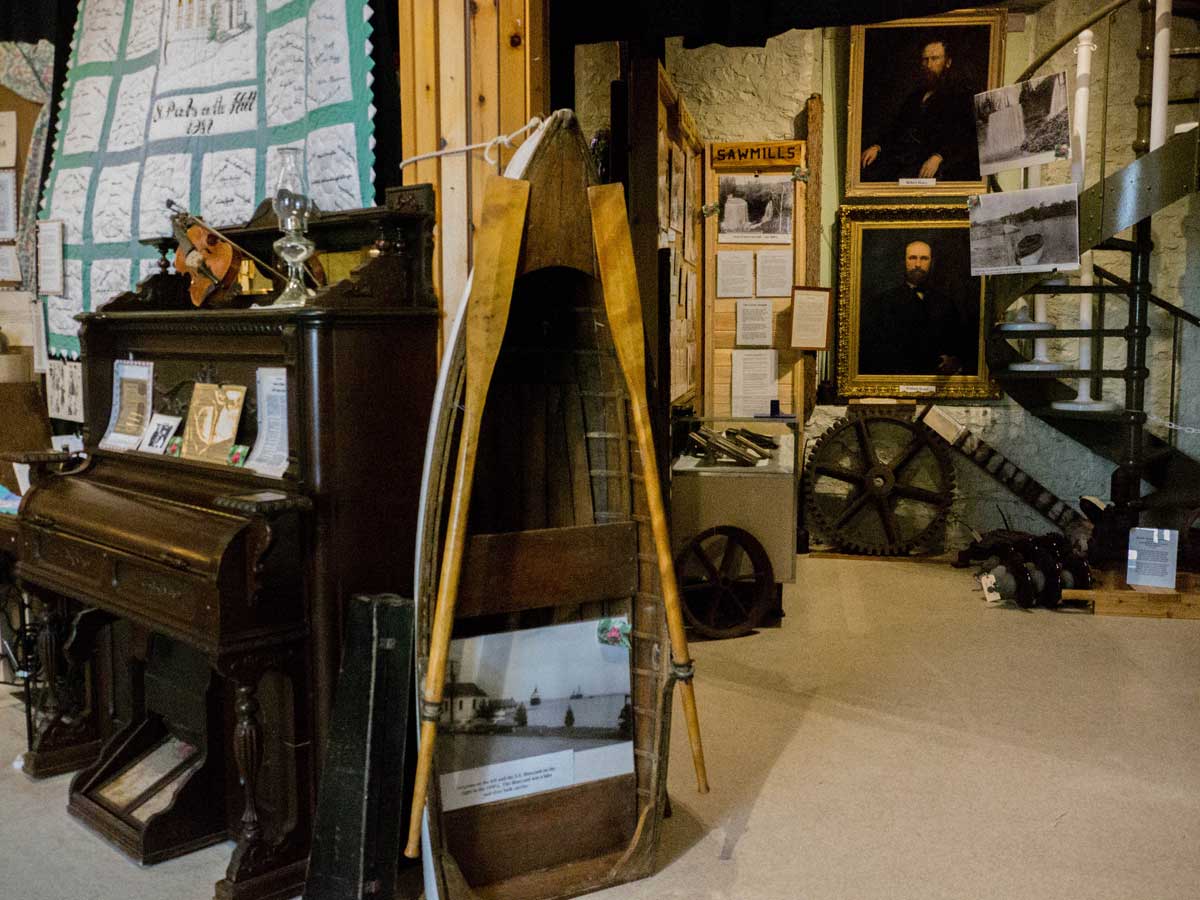 A highlight in this section is the story of Don Freeborn, the Chapleau-born Manitoulin resident who served in the Royal Canadian Air Force as a Lancaster Bomber pilot, attached to Britain’s Royal Air Force during WWII. His log book on exhibit documents his successful mission to bomb Adolf Hitler’s Eagle’s Nest in the mountains of Bavaria. Next to his father’s log book is the log of Peter Clarke, the son Don Freeborn did not know, until the end of his life, he had fathered in England during the war, and who also had a distinguished military career in Afghanistan, Burma and undercover elsewhere for the British Special Forces. The uniforms of father and son are displayed crisply side by side.

Early settlers to the area, the Graham, Gray, Thompson, McGuiness and Lloyd clans, are posed in the stiff attire and settings of late 19th century photographs. New this year is the realistic recreation of a blacksmith’s shop from the days when horses were essential to settlers’ daily lives. The boat building activities of the Berry family are displayed in authentic period examples of their fine work for over a hundred years, renowned for the sturdy construction of commercial fishing boats, timber tugs and launches powered by steam boilers. Still located in Kagawong and operated by Oliver Newlands, great-grandson of founder Oliver Berry, Berry Boats carries on the family boat building tradition today.

One of Rick Nelson’s favorite museum exhibits recounts the tragedy of the scion of Detroit’s Dodge automobile empire, Danny Dodge, who, in 1938, suffered grave wounds in a spectacular dynamite blast at his Dodge Lodge in Kagawong, then drowned on a desperate rescue mission to Little Current by boat with his wife. Married just 14 days to “Gore Bay beauty” Laurine MacDonald, a romance and fantasy wedding that were trumpeted in local and US media, the unfortunate Mr. Dodge died at 21 but was destined to live on in local legend.

The 80th anniversary of the accident will be commemorated by the Old Mill Heritage Centre on Thursday, August 9 in the annual History Day presentations at 3:30 and 7:30 pm. Each presentation features two parts: a talk by guest speakers on the founding Henry brothers and their role in the birth of Kagawong will be followed by the story of the gripping disaster at Dodge Lodge. 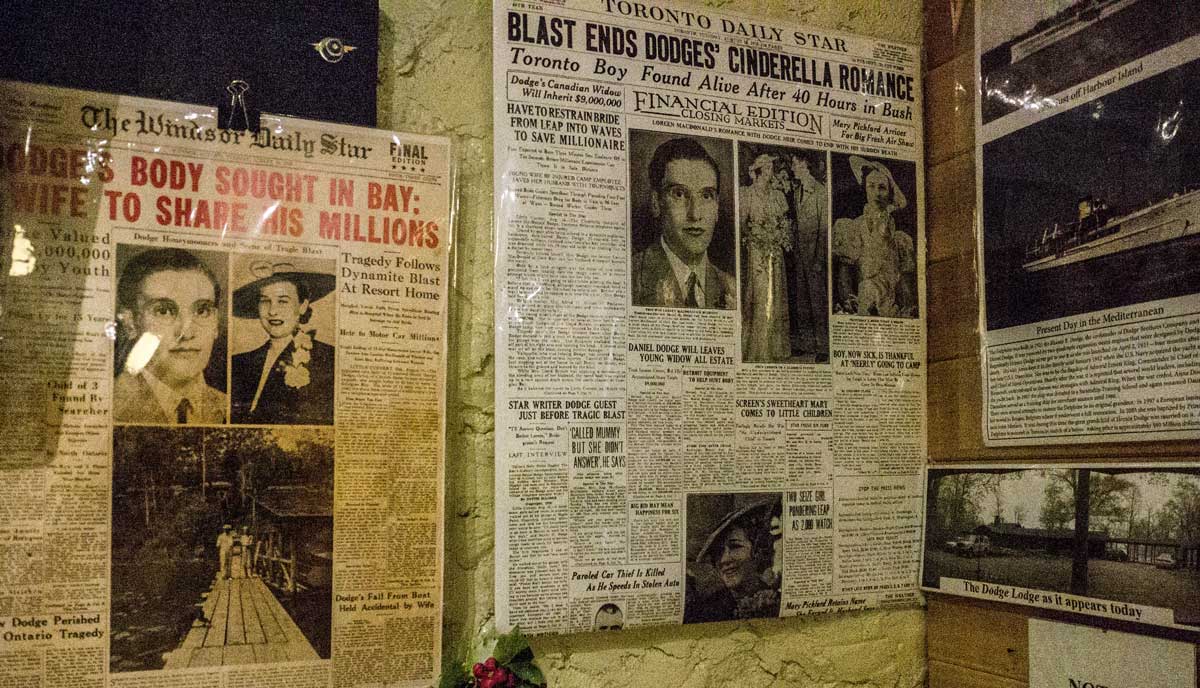 Another ‘ghost story’ depicted in the museum and endlessly fascinating to Mr. Nelson is the one about Harbour Island. Off the coast of Kagawong and nestled in a bay of Clapperton Island, the 30-acre island was home to a luxurious resort in the 40s, 50s and 60s that berthed the yachts of Hollywood stars and hosted the likes of Marlon Brando, Marilyn Monroe, John Wayne, Prime Minister Lester B. Pearson and countless sports figures and business tycoons. Clippings of the goings-on of the celebrity guests cover the wall near photos of the resort in its heyday; underneath is a photo of the sad state of the resort today. “There’s a happy ending!” crows Mr. Nelson as we gaze at the overgrown site and the derelict mid-century modern building. “The new owner of Harbour Island is a descendant of the original owners who is committed to restoring the property to its former glory. The Museum may consider perhaps partnering on a ‘living museum’ concept down the road.”

To whet the appetite for such a restoration project, the Mudge Bay Mystery Tour, a partnership between the Museum and North Channel Cruise Line, will lift anchor on Saturday, August 25 from Kagawong for a two-hour cruise to Harbour Island with dinner, bar and curator Rick Nelson’s onboard “stories and slides” of the famed resort’s past grandeur.

After a tour of the Museum, pause at the Billings Connections Trail Interactive Map on the wall by reception. In English, French and Ojibwe languages, the map shows the locations of historical plaques in the village and of the outdoor sculpture sites commissioned as a Truth and Reconciliation project in partnership with 4Elements and Billings Township “to highlight the local heritage and history of Anishinaabeg and settler residents.” A pocket-sized map is available to take on an exploration that continues well beyond the Museum’s steps.

Admission is free; donations are appreciated.